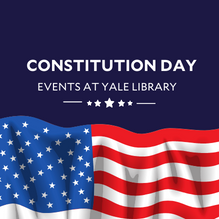 To commemorate the signing of the Constitution on September 17, 1787, this Day celebrates America’s foundational document. As a designated U.S. federal depository since 1859, Yale Library’s government document collection spans from 1789 to the present, including print and digital materials.

The United States Constitution formed the basis of our government, and subsequently, the offices, agencies and departments that generate hundreds of law, reports, documents and data sets each year.  Most government information is openly available but is not always intuitive to find.  This workshop will introduce major starting points for accessing government information, as well as options for organization and analysis once you have found information or data of interest.

Article I, Section 2 of the United States Constitution established the requirement of a census.  This workshop will explore ways to access, search, and use data generated by the U.S. Census Bureau.  Extending access and analysis to Excel, R and available APIs will also be discussed.

Introduction to Text Mining in R

Look at the US Constitution through the lens of text mining! Using R, basic analyses will be performed on the text of the United States Constitution, including word frequencies and clustering as a way of exploring text as data.